In 2000 when she was ten, Emma began filming for the first time with 11 year old Daniel Radcliffe and 12 year old Rupert Grint. She was extremely nervous! But, she had no reason to fear as, on its opening day, Harry Potter and the Philosopher’s Stone broke records all over the world and Emma won great critical acclaim for her performance as Hermione Granger. http://www.emmawatson.com/ 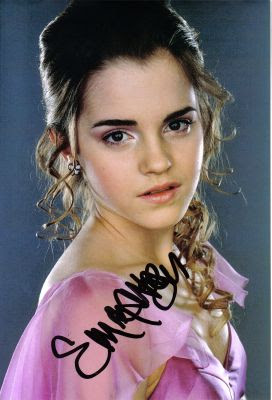 Emma Charlotte Duerre Watson (born 15 April 1990) is a French-born English actress who rose to prominence playing Hermione Granger, one of three starring roles in the Harry Potter film series. Watson was cast as Hermione at the age of nine, having acted only in school plays. From 2001 to 2007, she starred in five Harry Potter film instalments alongside Daniel Radcliffe and Rupert Grint. She will return for the final three instalments: Harry Potter and the Half-Blood Prince, due to be released in 2008, and the two parts of Harry Potter and the Deathly Hallows. Watson’s work in the Harry Potter series has earned her several awards and more than £10 million.

Emma supports UNICEF and asks her fans not to send her any birthday or Christmas present, but to donate to this charity instead.

The coat of arms of Hogwarts, representing the four Houses (clockwise, starting top right: Slytherin, Ravenclaw, Hufflepuff, Gryffindor), with the school’s motto, which translates to “never tickle a sleeping dragon”.